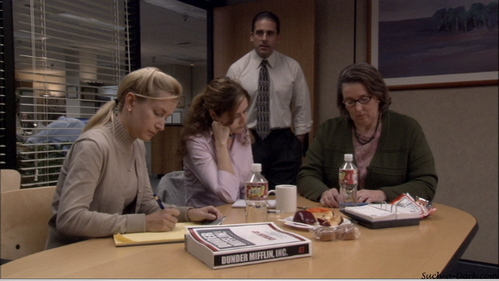 Not to be confused with The Committee to Plan Parties.

“At its worst, it was a toxic, political club used to make others feel miserable and left out. At its best, it planned parties.” —Pam Halpert

The Party Planning Committee is an office committee called upon to organize office events, sometimes on very short notice. It appears frequently in the show, even though it is fairly trivial, but it is fundamentally demonstrative of the Scranton branch’s office politics. The Party Planning Committee was shut down by Pam after she became office administrator. (“Classy Christmas”)

Historical members of the Party Planning Committee include former regular members Pam, Phyllis (former chair), and Angela (former chair). Other non-permanent members have once included Meredith, Kelly, Karen, Ryan, Holly, and Oscar. Jim and Dwight were also temporary heads to prevent the chair from gaining too much power.

These parties were planned prior to the beginning of the Office documentary.

A Pizza of Your Own Party

While it is unclear if there was an official change in the leadership of the Party Planning Committee, Phyllis Vance becomes the source of party planning authority and the de facto, if not formal leader.

In “Stress Relief”, Michael hosts a roast in the warehouse. In a deleted scene, Michael gives instructions to Darryl on how the stage should be arranged and what equipment he needs. He also tells Dwight to get a bigger poster of himself. It appears that Darryl and Dwight (mostly Darryl) did the party preparation.

Michael puts Jim and Dwight in charge of the Party Planning Committee because there was “too much drama.” Michael believes that consolidating power into a single head was too dangerous, so the committee chairmanship is now shared.